A Year of Work

I have friends with hobbies. Friends who do pottery, who take pictures, who go hiking, who make scarves or tables or beaded doodads. I've always kind of wanted a hobby, but they've never stuck. Instead, I work.

I find the idea of work, and working, comforting. It feels like I can leave everything else behind, but as long as I am with myself, I can always work, I can always do _something_ with my time. It is something I can always turn to.

Honestly, I love to work. As Jonny writes, it is something I can always turn to. Since I started Punk Planet when I was 19, I've largely fashioned my own work. Even when I've worked for someone else, I've never stopped working for myself too. Some of the lowest moments of my life have been defined in part by feeling unable to conjure the ideas, momentum, and enthusiasm to work. Thankfully, this year was not one of those years.

Here's a little rundown of some of the work I did this year that you should check out:

This year I made a conscious effort to break from the two years of COVID essays that defined much of my writing in 2020 and 2021. Not that the pandemic is over by any means, but I was feeling boxed in by that writing and wanted broaden my output.

The Fall and Rise of CM Punk
The biggest thing I wrote this year was a profile for Esquire of Phil Brooks, better known as the wrestler CM Punk, and his return to the wrestling ring after quitting the WWE nearly a decade ago. It features one of my favorite lines I've ever written: "It can take a while to realize the path you were on was the right one at the wrong time. That the thing you loved then is still the thing you love now, and that it’s still there, waiting for you." Honestly, that line's as much about me and writing as it is about Brooks and wrestling.

Jeff Tweedy Knows Good Days
I was lucky enough to get to be the first reporter to interview Wilco's Jeff Tweedy about the latest Wilco record, Cruel Country. Despite the record being fantastic, we barely talked about it, but instead talked about hope. It was one of those conversations that I needed to have.

Parenting in the Time of School Shootings
This essay was a raw nerve, a loose electric wire, pure fire and anger, written in the days after the slaughter of children in Uvalde Texas. Rereading it now, it's a hard read but a necessary one.

When Everything Happened So Much
As the implications of Elon Musk's takeover of Twitter became clear, I had a proposal: It was time to get weird. Things have been weird over on that site ever since.

Says Who Podcast
Says Who released 44 episodes this year, plus 38 bonus episodes for our Patreon supporters. Omfg that is bonkers. I just wrote about the unique relationship that Maureen Johnson, my co-host and co-conspirator on the podcast and I share, but suffice it to say that this year's episodes chronicled the further unraveling of both American society and our minds. If you're new to the podcast and looking for a jumping-on point, good luck—haha. But also this episode about the revelation that Trump's Diet Coke valet leaked to the feds is maybe one. Mostly, it's a weekly current events podcast: just jump in on the most recent episode and hang on.

The Hitch
In addition to Says Who, my partner Janice and I continued to document our summers spent in our trailer Evangeline on our podcast The Hitch. Easily the most wholesome content I make, every episode is a pretty chill 10-20 minutes of two people recounting their day from the rear bed of our Airstream. We started The Hitch the after Janice's cancer recovery and there's an underlying theme of doing hard things (and celebrating life) throughout the podcast. If you want a jumping on point, either just start at the start of this summer, or join us in overcoming our fear of driving over the mountains.

Plenty of what I do doesn't fall into an easy category so here's some highlights of other things:

This Blog
In the aftermath of Twitter's takeover, I decided I needed to start establishing some spaces outside of owned platforms. When I rebuilt dansinker.com it was just going to be a more robust "about me" site, but late in the game I decided that one of the things that the collapse of the big platforms enabled was revisiting some of the good ideas of the "old" internet so I dove into make a blog. Honestly, it has been so awesome I'm kicking myself for ever stopping.

Says Who Sticker Club
Every month I look forward to designing, ordering, and shipping the sticker that goes out to the $10 Patreon supporters of Says Who. Creating these little pieces of ephemera—sometimes capturing a moment from the podcast, other times a reference to current events, sometimes just a piece of podcast-adjacent art—is a monthly joy. As someone that came up making art, reconnecting with drawing, type, and design has been a joy. 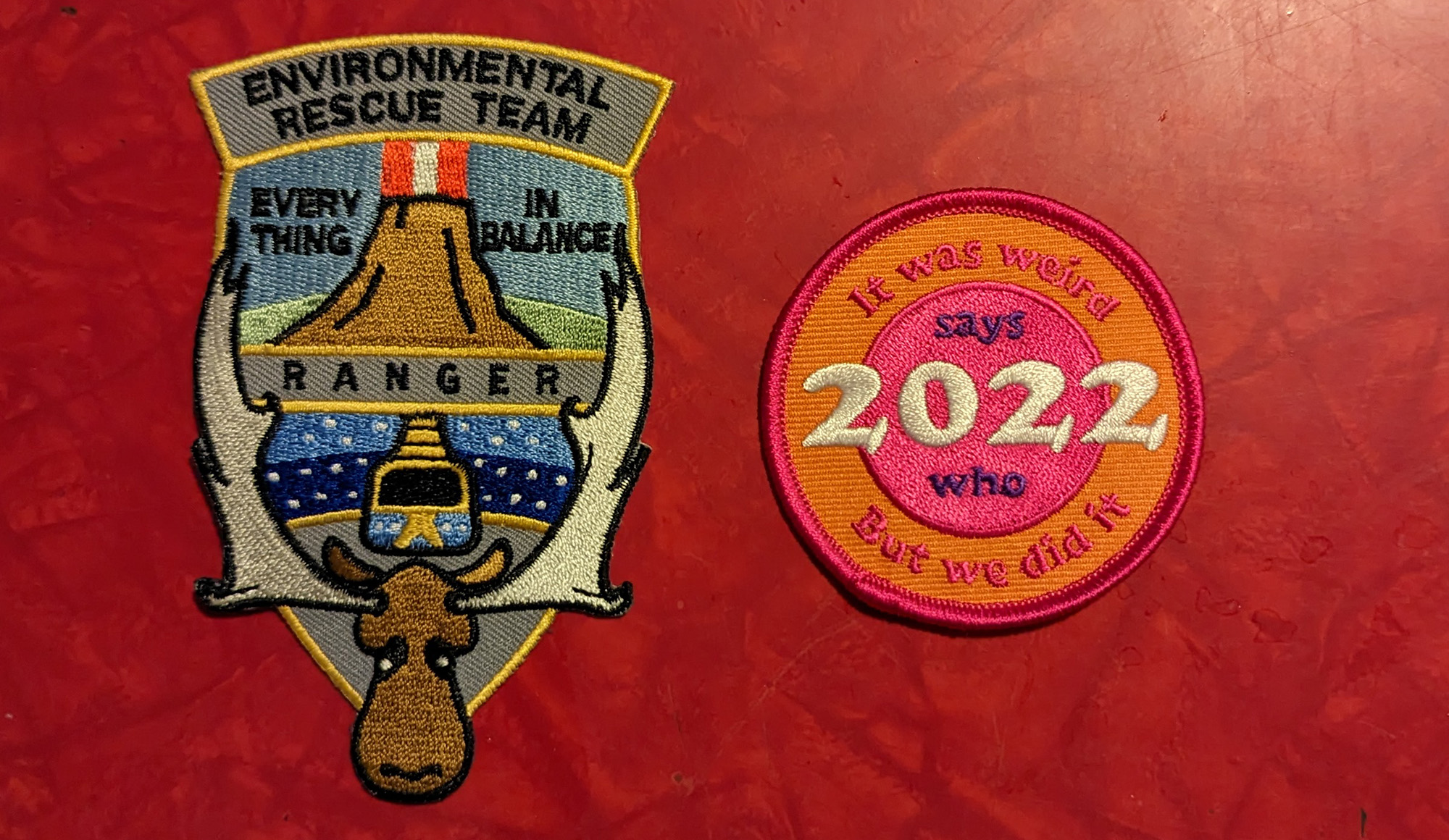 Patch for Annalee Newitz on the left, for Says Who supporters on the right

Patches
The work on the Says Who Sticker Club lead directly to an email from author Annalee Newitz, who wanted me to design a patch to promote her new book The Terraformers. I'd never made an embroidered patch before, so not only was it a fun design challenge, it was also a kick-ass research project to find a manufacturer and understand the process enough to make something great. In fact, it was so fun I did it again as a surprise year-end gift for Says Who supporters.

I've done a lot more work than all of this, but these were the highlights this year. Go check 'em out, and let's get to work in 2023.

Want to follow my writing without having to randomly check to see if my blog has been updated? No problem! You can always subscribe via RSS. You can follow me on Mastodon, where new posts will automatically be posted. Or you can have new posts sent directly to your email by subscribing to the newsletter version of this very same blog.

Just pop your email in below and you'll be subscribed: